What Happens When the Neutral Zone Expands? 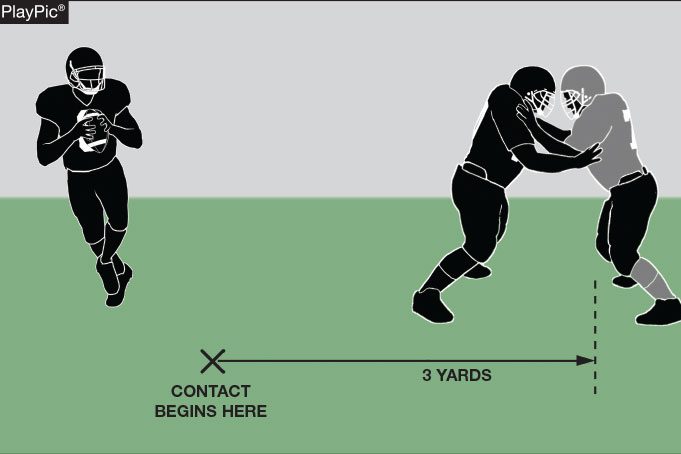 The neutral zone is one of the basic tenets of a football game. In practical terms it’s the space between the offensive and defensive lines. The neutral zone is clearly defined (NFHS 2-28-1; NCAA 2-17) and is established when the ball is ready for play. The width of the zone is the length of the ball. When the play begins, that clear delineation disappears.

For NFHS scrimmage kick and forward pass plays, the neutral zone may be expanded following the snap to a maximum of two yards beyond the defensive line of scrimmage in the field of play. That is termed the expanded neutral zone (2-28-2). Under NCAA rules, there is no such formal definition; however, on certain plays, action within three yards of the neutral zone is treated as if it had occurred within the zone.

However, while they are within the expanded zone, they may only contact team B linemen and that contact must be initiated immediately after the snap (7-5-11b).

In NCAA, an ineligible team A player may continue up to three yards from the neutral zone if he immediately charges and contacts an opponent at a point not more than one yard beyond the neutral zone (see PlayPic). Contact must be broken at the three-yard point and the ineligible must remain stationary at that spot when contact is broken. Note that any opponent can be contacted, not just linemen as in NFHS. However, also unlike

NFHS, only ineligibles can block opponents within the three-yard belt. On plays when a forward pass crosses the neutral zone, eligible receivers may not block beyond the neutral zone (7-3-8b1, 7-3-10).