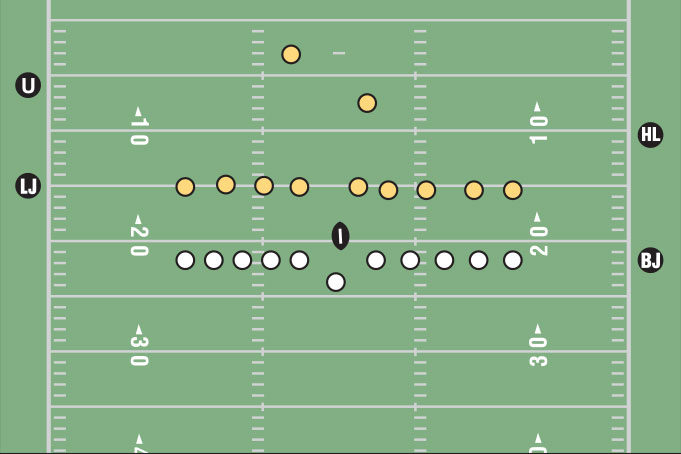 If something funky happens in a football game, it usually occurs during a kick play. Such downs are a smaller percentage of all plays in a game, but heightened rule six awareness is required for punts, kickoffs, kick tries and field goals. Of the rare fouls and unusual situations that can materialize, many of them are part of a down when the ball meets the foot.

Have you ever seen a drop kick in your career? Probably not, but you need to recognize it when it happens. On a drop kick, the kicker lets the ball fall out of his hands and he kicks it as it hits the ground or just after the ball contacts the turf. A drop kick is allowed for any kick play in both rule codes (NFHS 2-24-6; NCAA 2-16-3).

Other untraditional events can catch you off guard during a kick play. They include a punter kicking the ball after being beyond the line, a return kick and in NFHS, a free kick after a fair catch or awarded fair catch.

A return kick occurs when a kick is caught or recovered by a team R player and he then kicks the ball back toward the original line of scrimmage. That is illegal in both rule codes (NFHS 6-2-1; NCAA 6-3-10b). It is a live-ball foul in NFHS. The penalty is 15 yards from the spot of the foul. In NCAA, a return kick is a live-ball foul which causes the ball to become dead. If the penalty is accepted, it brings a five-yard penalty from the spot of the foul.

In all my years of football officiating, I have yet to see a team opt for a free kick after a fair catch or awarded fair catch. It is only legal in NFHS (6-5-4). Everyone assumes team R will next snap the ball. Referees probably never offer this choice. Have you ever presented this selection? 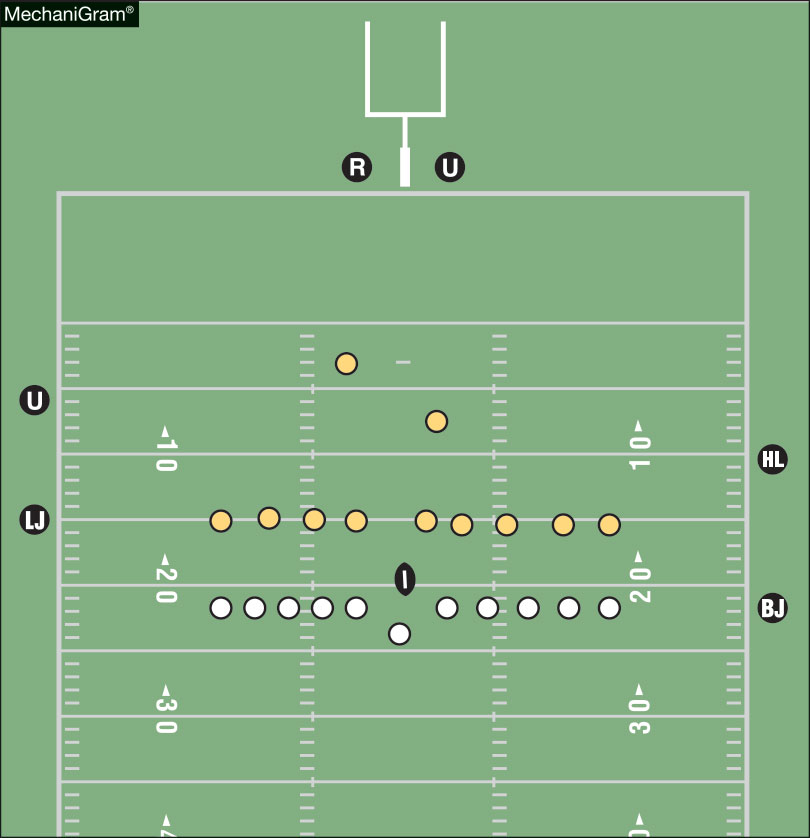 All other free kick rules apply such as ball placement anywhere between the hashmarks; the ball may be placed on a kicking tee, on the ground or held by a holder; both teams must remain behind their free kick restraining line until the ball is kicked; the clock doesn’t start unless the kick is touched other than first touching by team K; there is a potential for a touchback or a momentum exception; and team R can catch or recover the kick and advance if it never breaks the goalline plane.

According to the NFHS mechanics manual, as seen in the MechaniGram, for a free kick following a fair catch, the referee and umpire are positioned behind the uprights and determine whether the kick is successful. The remaining officials take their normal positions for a free kick.

Play 2: A short punt from the end zone goes to team K’s 25 yardline, where the home team completes a fair catch. Behind by one point with two seconds left in the fourth quarter, the home team elects to try a free kick to try to win the game. The kick (a) goes through the uprights and over the crossbar, (b) first touches the ground in the end zone, or (c) is wide right. Ruling 2: In NFHS, in (a), the home team is awarded three points and wins the game. In (b) and (c), the kick is no good and the visiting team wins the game. In NCAA, a free kick is not allowed.

Note that in the above situation, the home team could also have attempted a normal field goal. But for the NFHS team, deciding to free kick has several advantages. There is no chance of an errant snap as there is no snap. The possibility of a blocked kick is virtually eliminated since the other team is 10 yards away. And the kick is closer (about seven yards) to the goalpost than if there was a snap to a holder.

Other free kick rules also apply, like first touching and possible recovery by team K after the ball goes 10 yards or is first touched by team R.
You don’t often see a team K player going out of bounds when running downfield during a kickoff or punt. It matters whether or not such a participant is forced out by a team R player.

Play 3: K1 goes downfield to cover a punt. He steps on the sideline for two steps and comes back onto the field. K1 (a) is forced out of bounds by R2, or (b) goes out of bounds on his own. Ruling 3: Under both codes, there is no foul in (a). In (b), in NFHS, that is a foul for illegal participation (9-6-1). The 15-yard penalty is enforced from the basic spot. In NCAA, in (b), that is a foul for player out of bounds (6-1-11, 6-3-12). The penalty is five yards from the previous spot or five yards from where the subsequent dead ball belongs to team R.

If a team K player is forced out of bounds, he must immediately return to the field. In NCAA, there is no problem for anyone on team R being out of bounds during a kick play, forced or not.

You must be prepared with knowledge of the rules pertaining to all kick play fouls and situations covered here in case one of them transpires in your game.