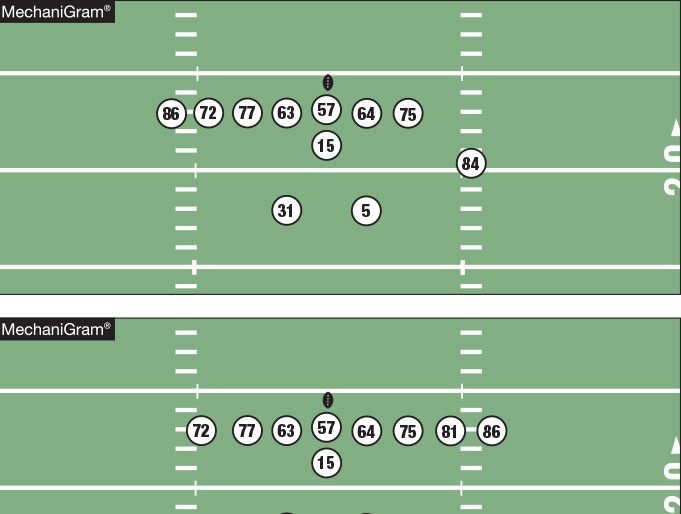 Defensive players can align themselves anywhere for scrimmage plays as long as everyone is on the proper side of the neutral zone. There is no set number of players needed on or off the line, nor are there any team B position numbering rules.

The same cannot be said for the team that snaps the ball. Creative coaches have come up with unique offensive player arrangements, with players spread all over the field and in unique positions. Your challenge is to discern a legal vs. illegal formation when the ball is put into play.

An offensive formation is not illegal until the snap because team A may shift into a legal formation before the ball is live.

You must know where players are located after they all come to a complete stop. Motion after that point is fine as long as it is only one player moving parallel to the line or backward (NFHS 7-2-7; NCAA 7-1-4b). 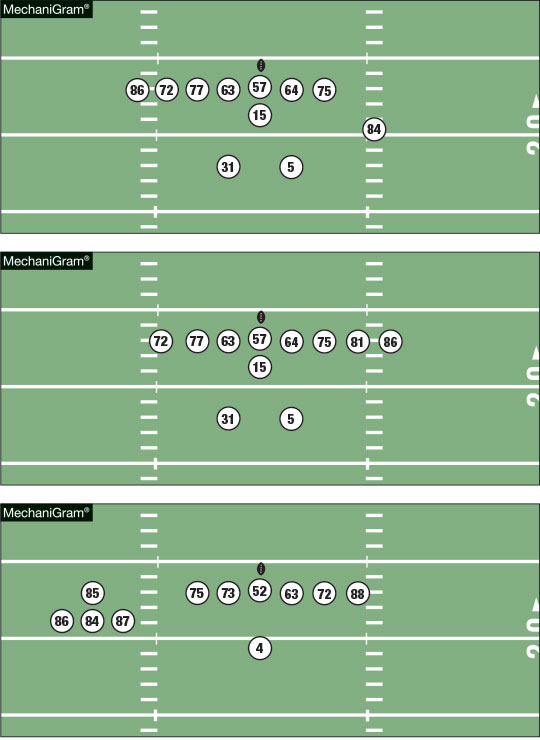 Another not-so-usual situation is when only one eligible receiver is on the line (MechaniGram B). An end (number 86 in this case) may “cover up” a player wearing an eligible’s number; thus, number 81 is an ineligible receiver. What usually happens is a run or that player remains behind the line if a pass is thrown downfield. He must be monitored for being illegally downfield if a pass crosses the line.

And then there are multiple receivers — as many as four — on one side, such as in MechaniGram C. A challenge for the officials is who is watching whom. That is a bigger problem for crews of five and less. Regardless of the size of the crew and no matter the formation, knowing your keys is crucial. An added issue is knowing who goes downfield and who stays in the backfield when a pass is thrown. Several scenarios can develop from that configuration, like a wide receiver screen. If the pass doesn’t cross the line, receivers and interior linemen can block downfield. If a pass is first touched or caught by a receiver beyond the line, team A may not block downfield nor be beyond the expanded neutral zone lest they be flagged for being an ineligible downfield.

In NFHS there must be at least seven players on their line for all scrimmage formations at the snap (7-2-5a). No more than four players may be backs in NCAA (7-1-4a-4). Note that team A could have as many players on the line as it wishes; there is no maximum.

Except for scrimmage-kick formations, there must be at least five offensive linemen wearing numbers 50 to 79 (NFHS 7-2-5b; NCAA 7-1-4a-3). That applies to team A players on the line at the snap. There is no flag for non-compliance with numbering rules until the ball is snapped. Again, a lineup could become legal after a shift. Interior linemen do not have to wear numbers 50 to 79 for scrimmage kick formations. Those are exceptions to standard numbering rules (NFHS 7-2-5b Exc.; NCAA 7-1-4a-5).

The swinging gate has gained wide acceptance. All criteria for a legal formation apply such as proper numbers, required number of players on the line or backfield, and covered-up receivers.

Restrictions exist for linemen locking legs in NFHS (7-2-2). Prior to the snap, only players next to the snapper may lock legs with him. It is common to see linemen move to lock legs after the snap, especially for a field goal or kick try. That is legal. There are no leg-locking restrictions in NCAA.

Screwy alignments may be a component of a trick play. It is hoped head coaches will warn you in the pregame meeting when asked if they have any unusual formations or plays. But don’t count on always getting that info.

Strange lineups are fun for fans to watch and for coaches to invent to try to deceive the defense. But officials have to know what team A setups are legal and what deserves a penalty flag at the snap for illegal formation. You cannot be caught off guard when players are uncommonly positioned during a football contest. So be ready.